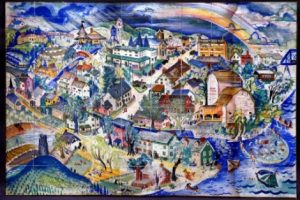 CLICK HERE on Thursday, March 18 at 2 pm for this very special presentation live on Zoom.

Bucks County, Pennsylvania–the name conjures up images of colonial villages, pastoral vistas, and famous artists. Walking down the streets of Doylestown or New Hope in the 1930s or 40s, you might have glimpsed humorist Dorothy Parker at a lunch counter or satirist S. J. Perelman at the hardware store, not to mention Pulitzer-Prize-winning writers like Oscar Hammerstein, James A. Michener, George S. Kaufman, Moss Hart, or Pearl S. Buck. Thanks to cheap real estate, proximity to New York City, and the lure of country living, Bucks County became such a well-known haven for creativity that the New York media began to call it “the genius belt.”

This Art Talk tells the story of Bucks County’s rich artistic tradition: from the nineteenth-century’s best-known primitive painter, Edward Hicks, to the turn-of-the-century birth of a major art colony along the Delaware River, to the influx of literary and theatrical figures during the Depression. Join the Michener for a look at Bucks County’s early cultural “Golden Years.”

Can you name these people or offer insight into these photos?